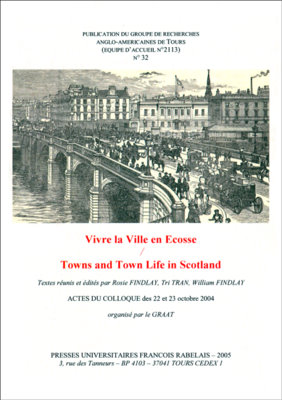 The growth of towns or cities, and the radical overhaul of the balance of population between the rural and urban worlds that this implies, is one of the most sensitive indicators of the emergence of a modern industrial state.

Nor surprisingly then, Scottish towns are seen as central to any understanding of modern Scotland. For some they have an identity all of their own which distinguishes them from towns in other parts of the United Kingdom. Indeed it is to these same towns that political scientists have turned to explain why the Scots have never lost their sense of national identity, despite Scotland's stateless nation status since 1707.

This GRAAT conference brought together contributions from a wide range approaches to the Scottish urban experience: from history to literature, architecture and the fine arts. They focus on three main perspectives. Firstly we have images of the city and an exploration of how these became part of the Scottish mind-set. A second perspective concentrated on the Scottish city during the nineteenth century. Finally, there is the twentieth and twenty-first century revival with its distinctive avenues of development. All in all, a recognition of the fascination which the distinctiveness of urban life has exerted over the Scottish people as much as a tribute to the renewed dynamism of Scottish studies in France.